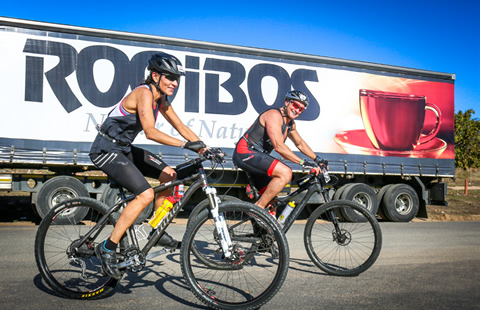 The 32nd Freshpak Fitness Festival took place in and around Clanwilliam in the heart of the Rooibos world on Saturday, 29 September. Professional and amateur athletes competed in various swimming, cycling and running events at this multi-sport festival which celebrates fitness, family fun and all things Rooibos.

Nicholas Quenet, a student from Stellenbosch University, won the men’s triathlon for the third consecutive year. Slashing his time by almost four minutes, Quenet took advantage of the ideal conditions to finish in 01:00:44. Dean Hopf won the duathlon. Michelle Krebs was crowned as the women’s triathlon champion, finishing in a time of 01:15:03 and improving her 2017 time by over six minutes. Almari de Milander secured a comfortable win in the women’s biathlon.

Athletes and spectators were rewarded with a dam that was 100% full after the drought. Last year, the Clanwilliam Dam’s levels were the lowest in the history of the event.

A percentage of the proceeds raised from entry fees was donated to CANSA’s local branch that serves the West Coast region. Rooibos, which only grows in the Cederberg, has antioxidant properties that help to fight cancer when incorporated as part of a healthy lifestyle.

Staff members from Rooibos Ltd took care of the preplanning of the event and all the arrangements with the registrations. As in the past, Rooibos Ltd sponsored and presented a workshop to train local inhabitants as marshals to provide support to athletes on the day of the Freshpak Fitness Festival. The team of cross-country runners – Hardlopers vir die Here – sponsored by Rooibos Ltd, helped at the festival to keep the venue clean throughout the day.

For results and times of the various events, visit
www.freshpakfitnessfestival.co.za

Rooibos Limited honours long-service employees – including an employee that has been with the company for 40 years!

House of Rooibos – the place to enjoy Rooibos in Clanwilliam

House of Rooibos opens its doors in Clanwilliam

What are the expectations for this year’s Rooibos harvest?