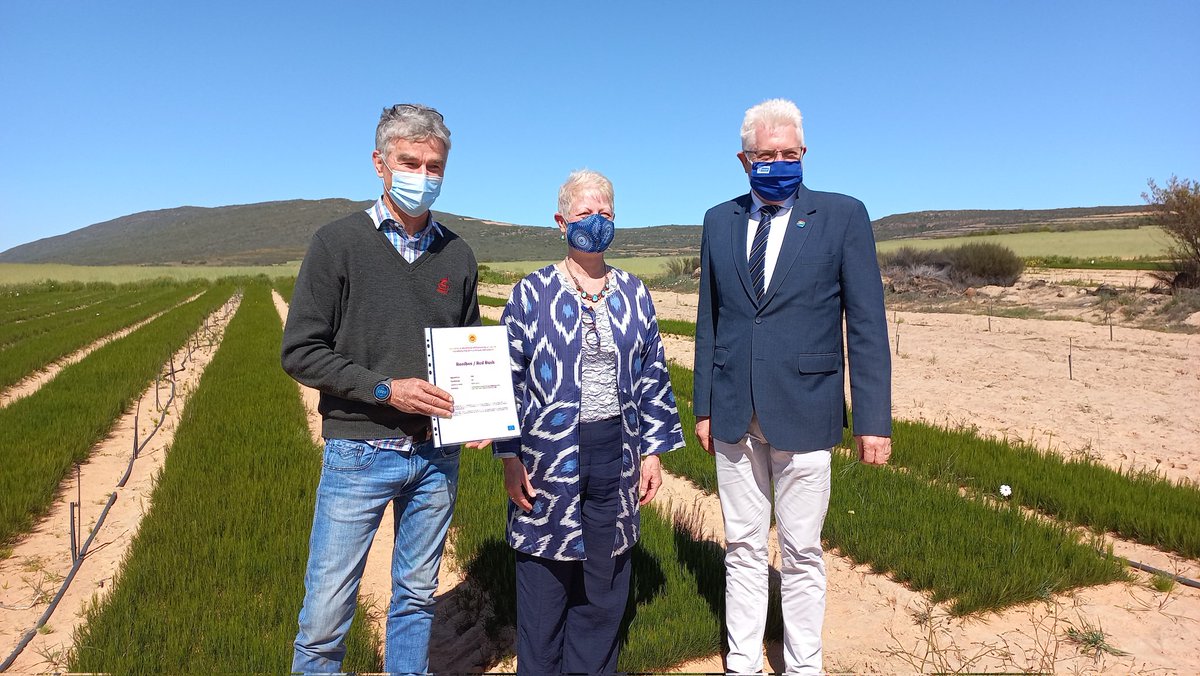 Today, the Premier of Western Cape, Alan Winde, presided over a ceremony whereby the European Union (EU) Ambassador to South Africa, Dr Riina Kionka, handed over a certificate to the Rooibos industry recognising its registration for Protection Designation of Origin (PDO) in the EU.

A PDO identifies and links a product to a region, associating its quality and reputation to that area. Rooibos now receives the same protections as Champagne and Parmigiano, creating greater production recognition and demand, and thereby stimulating job creation.

Premier Winde said: “I welcome the collaboration between the Western Cape Government, the Rooibos industry andthe European Union, which has ensured that Rooibos is registered as a PDO.  Rooibos is now the first African product to receive PDO status from the EU which wil afford greater access to the indusry.”

Speaking to the bilateral relationship between the Western Cape and the European Union, the EU Ambassador to South Africa, Dr Riina Kionka, said: “It’s great news that South Africa’s agri-food exports to the EU have grown to just under R40 billion despite the pandemic. The successful registration of ‘Rooibos/Red bush’ as a Geographical Indication will contribute to South Africa not only sustaining but growing jobs and incomes in benefitting rural communities. For the EU it is a priority to work with local partners to develop agri-value chains to benefit local development and jobs growth.”

Food products listed on the EU register of PDOs generate almost R1.24 trillion in value. There is significant demand for Rooibos in Europe. “Among Rooibos’ top importers in the EU are Germany, Netherlands, France, Belgium and Italy. We look forward to seeing the economic impact that PDO registration will have on this important industry and its revenue stream. I commend all the stakeholders involved who have played their part in making this a reality,” added Premier Winde.

Over the past 20 years, Dr Dirk Troskie from the Western Cape’s Department Agriculture has diligently managed and supported the Industry during the registration process. It required significant consultation and deliberation between the industry and European Union.

This was crucial to improve market access with the European Union and will help to:

Dawie de Villiers, SA Rooibos Council legal director said: “As an industry we recognise the close connection between Rooibos, the area where it grows, as well as the community and their traditions. Our goal is to protect, support and promote the sustainability of not only Rooibos, but the rich heritage of the industry as a whole, which is why we so doggedly pursued the registration. Rooibos also forms part of SA’s rich biodiversity, and we believe that the registration will make way for other indigenous species, such as Buchu and Aloe ferox to also be indicated as PDOs and reap similar rewards.”

Going forward, producers will be able to include a PDO logo for Rooibos on their product. The registration further means that Rooibos can only be used to refer to the dried leaves of pure Rooibos, farmed in the relevant municipalities of the Western and Northern Cape.

The MEC of Agriculture, Dr Ivan Meyer, said: “Rooibos is one of the most iconic products of the Western Cape. Its inclusion in the EU’s Geographical Indication Register will signal its unique quality to consumers, not only in Europe but worldwide.  It will also enable South African producers of ‘Rooibos’/’Red Bush’ to market their products better in the EU. We expect this to increase demand by discerning consumers with the benefits, eventually trickling back to farms in the designated production area. Safeguarding our traditions and culture will undoubtedly advance the Rooibos industry’s commercial interests and lead to an increase in production, exports and jobs.”

The next steps for Rooibos are to explore what is needed for an international geographic indicator and start the processes to get the name protected outside of Europe. An application has been submitted to the World Trade Organisation for an International Harmonised Systems Code for Rooibos.

The Western Cape Government is further exploring how other products from our province can receive the same protections including Cape Flora (such as Proteas), Honeybush, Buchu, Aloe Ferox, Karoo Granate and Karoo Lam. We remain committed to supporting our local economy and driving job creation in the Western Cape.