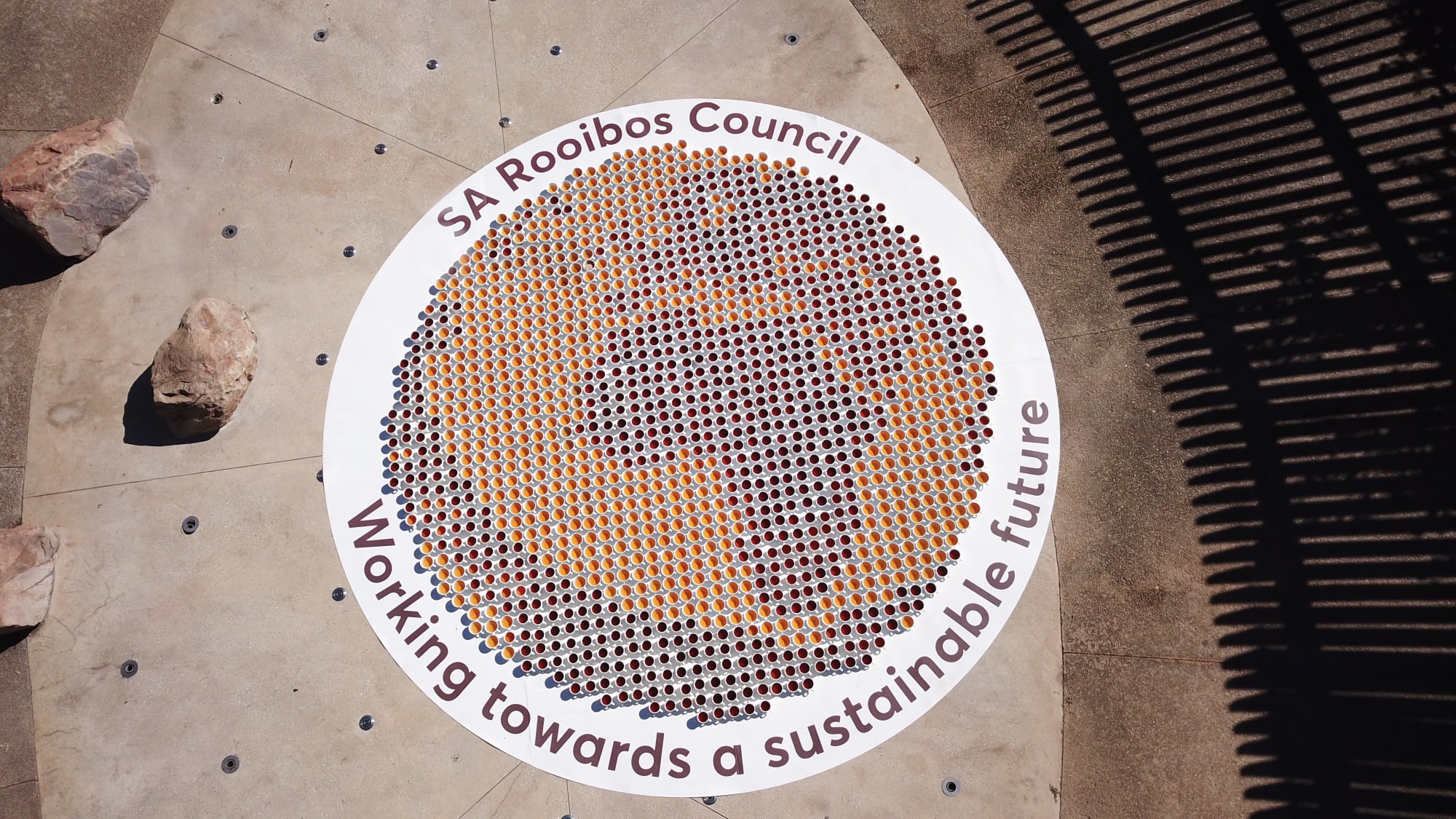 While the Rooibos industry has always had environmental preservation at heart, an increased global demand for the tea has compelled the industry to more proactively review its impact across its value chain.

Nicie Vorster, a director of the SA Rooibos Council (SARC) says the industry is renewing its focus on sustainability.

“Ecosystems all over the world are being destabilised due to human impacts. Our warming climate, water scarcity, extreme weather, the increase in infectious diseases and loss of biodiversity are all effects of human intervention. There is such a close link between Rooibos and its environment where climate and weather conditions directly influence production. While agricultural practices can be adapted, changes such as increased temperatures, water shortages and weather extremes create challenges for Rooibos farmers and agriculture as a whole.

“It is important to realise that all of our actions play a part. To address and mitigate the effects of climate change require a collective effort by businesses, NGOs, development organisations and policymakers, and the Rooibos industry too has a role to play. The changes that have over time taken place within the sector, as part of its goal to becoming more sustainable, have already begun to yield, and will continue to deliver, consistent, positive social and environmental outcomes, while also strengthening the economic viability of the sector.”

To symbolically demonstrate the industry’s uncompromising commitment to sustainability, the SARC has constructed a visually impactful public art installation in Johannesburg to culminate with World Environment Day, which falls on Saturday, 5 June.

Mixed media artist, Gina Waldman was commissioned for the art installation, which consist of almost 2 000 cups of various Rooibos tea blends that have been carefully positioned to form a globe when viewed from atop.

She says the artwork is intended to draw viewers in to take a closer look and decipher the meaning of the work. “We want the public to engage with the artwork and hope that it will assist in the transition towards a more eco-conscious and sustainable society. It serves as a powerful reminder that we all need to play our part in our everyday lives to protect and restore our beautiful planet.”

The 40m² art installation took 70+ hours, a design team of eight and 320 litres of tea to perfect, and can be viewed at the Walter Sisulu Botanical Gardens in Roodepoort up until 5 June.

Vorster says they chose to illustrate their pledge towards social and environmental stewardship in a creative way, because art has the ability to connect with people on emotional and subliminal levels, sometimes inspiring a heightened appreciation for nature or a re-evaluation of human progress. In a way, art connects people to our living environment. “It helps to shape how we view and understand the world, encouraging discussion – in this case about environmental and sustainability issues and often brings people together to unite behind a common cause.”

Some of the strides made by the Rooibos industry in transitioning towards a greener, more sustainable sector are as follows:

The industry and those who have been involved with it over many years, have a deep understanding and respect for the relationship between the Rooibos plant and its environment. To protect the Fynbos biome in the Cederberg – the only region in the world where Rooibos is farmed – the industry has worked alongside government and NGOs to establish the Greater Cederberg Biodiversity Corridor (GCBC) to preserve the area’s unique biodiversity. Approximately, 70 406 ha is now under conservation through stewardship agreements and a further 282 953 ha is under voluntary agreements with the biodiversity and business projects in the Rooibos and other agricultural industries.

Farmers have also adopted best practice farming methods through crop rotation, the use of Integrated Pest Management Techniques (IPM) and decreased use of chemicals. As Rooibos is connected to nature, it is also connected to the people of the Cederberg and improved, and stable working conditions remain a strong focus of the industry.

Farmers and processors realise the importance of holistically looking at the interaction between the environment, the Cederberg community and business sustainability within the industry, as well as participation in third-party sustainable certification, which incorporate all of these aspects. Fairtrade, UTZ- and Rainforest Alliance certification™, gives consumers the assurance that Rooibos has been sourced in a way that is better for producers and the environment. The certification means that farms have met the environmental, social and economic standards of both the Fairtrade International, UTZ and the Sustainable Agriculture Network (SAN), which cover ecosystem conservation, worker rights and safety, wildlife protection, water and soil conservation, agrochemical reduction, decent housing, legal wages and contracts for farmworkers.

In addition to the many charities and community upliftment initiatives that the Rooibos industry has established and supports, it has also signed an Access and Benefit-sharing (ABS) agreement with the Khoi-Khoi and San, represented by the National Khoi and San Council (NKC) and the San Council of South Africa (SCSA), which allow the Khoi-Khoi and San communities (as the first people to live in the Rooibos growing area) to benefit from the sale of Rooibos.

It is the first agreement of its kind in the world – both in terms of the interpretation and application of the Nagoya Protocol and aims to share benefits with identified communities.

The accord is regarded as an important milestone in the history of global governance for the preservation of genetic biodiversity, associated knowledge and poverty relief.

The fact that Rooibos only grows in the world’s largest Fynbos biome, makes it a unique and sought-after product, as can be seen in the steady interest from and growth in the market, increasingly positioning Rooibos as a high-value agricultural product from South Africa.

It’s not only Rooibos’ health benefits that makes it highly desirable, but also its versatility. Apart from tea, it is used in multiple applications, ranging from beauty products and nutraceuticals to alcoholic drinks, confectionary and everyday foodstuffs, such as yoghurt and cereal.

By its inclusion in the Geographical Indication Protocol of the Economic Partnership Agreement (EPA) between the Southern African Customs Union (SACU) and the European Union (EU), Rooibos is also protected as a GI in the EU. A GI links a product to a specific geographical area, which indicates the origin of where the product is produced, processed or prepared. This means that the word ‘Rooibos’ or ‘Red Bush’ can only be used for Rooibos tea imported from the Western Cape region.

Vorster says, the ability to produce unique products, with real and unique customer value propositions will give manufacturers and branders an edge. “Extensive research into Rooibos’ benefits is also likely to lead to new health applications, broadening the market and scope for the industry.”

An estimated 5 000 farmworkers are employed by the Rooibos sector and additional employment is created in upstream activities, such as processing, packaging and retailing.

On average, about 14 000 tons of Rooibos are produced every year, of which half is consumed locally, while the rest is exported to more than 30 countries across the globe. Germany, the Netherlands, Japan, UK and the US are currently the biggest importers of the tea.

“While enormous strides have been made to make the Rooibos tea chain more sustainable, we can always do more, and we will build on the foundation we have to continue working on all three dimensions of sustainability: environmental, economic and social, while also taking the Agenda 2030 Sustainability Development Goals into account.

“As our sustainability journey continues to gain momentum, we are encouraging other industries and the public to also play their part in preserving the environment and building a green economy in which all can thrive,” remarks Vorster.

About the SA Rooibos Council:

The South African Rooibos Council is an independent not-for-profit organisation with voluntary membership. Its mission is to responsibly promote Rooibos and the industry based on an informed and collaborative approach. It was established to protect consumers and the industry, and to support ethical practices and the sustainability of the industry.

Gina Waldman specialises in large installation art and lives and works in Johannesburg. She is also the founder and director of Waldman Studios – an art agency that works on bespoke commission work. Since completing her Masters in Fine Arts at the University of the Witwatersrand in 2003, Waldman has developed her own unique style, which as distinct as it is, is also constantly evolving.

Gina Waldman: “I was commissioned by the SA Rooibos Council to use Rooibos as a medium to create a meaningful art installation for World Environmental day. I generally work on large scale installations through many different mediums and really loved the idea of using tea to ‘paint’ with. It was definitely a project of collaboration and so many people were involved in making this happen. Once we settled on planet earth as our illustration, we pixelated a globe, experimented with countless Rooibos blends to achieve the colour palette that we wanted and then laid it all out on a printed floor template.

Three teas were used as primary colours. Green Rooibos gave us yellow; plain Rooibos provided the reds and a large amount of stokkies or loose leaf Rooibos tea, steeped for long periods, yielded the rich reddish, brown tones in the artwork. The in between shades were obtained by varying the steeping times of the tea, and in some cases, mixing the teas together. Hours of planning went into perfecting the assembly.

Apart from enjoying a good cup of Rooibos, the underlying message, which reminds us all to play our part in saving our beautiful planet, is what drew me to the project and hopefully the artwork will draw more attention to environmental issues.”