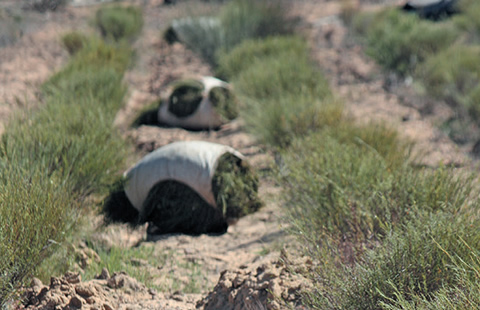 National Rooibos Day on 16 January is about celebrating Rooibos, and raising awareness of the health benefits and uses of this indigenous South African product.

The date – 16 January – coincides with the birthdate of Benjamin Ginsberg (born in 1885), who played a major role in the establishment of the Rooibos industry. Ginsberg is credited with registering Rooibos as a trademark and exporting the tea. His descendants are still active in the Rooibos industry.

To engage with the public on National Rooibos Day, the people from Clanwilliam in the heart of the Rooibos region were invited to help set up a new world record for the biggest number of people drinking Rooibos at the same place. And so, on Wednesday morning, 16 January 2019 at 10:00, employees from Rooibos Ltd, Clanwilliam’s Kaap Agri, Clanwilliam Secondary School, Sederberg Primary School and members from the public gathered at the rugby field of Sederberg Primary School. Their mission? To break the 2017 record of 1246 people drinking Rooibos together.

With 1960 people pitching for the event, a new world record was set. Renier Zeelie and staff from AgriMark Clanwilliam handled the arrangements for setting up this record-breaking Rooibos-drinking event. The iced Rooibos tea for the event was sponsored by Rooibos Ltd.

The audience also listened to a talk on Rooibos.

Martin Bergh, chairperson of the South African Rooibos Council (SA Rooibos), said that while the demand for Rooibos is still growing, it was regionalised. “In the Far East, especially Japan, growth has been strong, while the market in South Africa has actually decreased as a result of high prices,” he explained.

Rooibos is currently exported to 63 countries across the world with Germany and Japan being the biggest export markets.

Rooibos Limited honours long-service employees – including an employee that has been with the company for 40 years!

House of Rooibos – the place to enjoy Rooibos in Clanwilliam

House of Rooibos opens its doors in Clanwilliam

What are the expectations for this year’s Rooibos harvest?