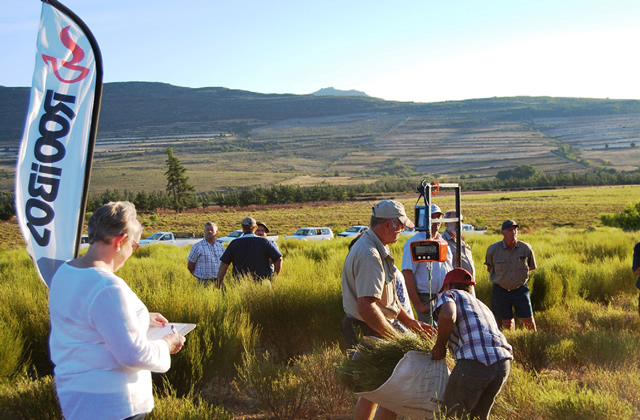 Who can cut the most Rooibos in just 7 minutes? During March, in the midst of the Rooibos harvesting season, the Olyfenboschkraal Agricultural Association in cooperation with Rooibos Route hosted a Rooibos cutting competition among its members. This event was co-sponsored by Rooibos Ltd. Members could enter one or two tea cutters per farm. Tea cutters from farms like Pampoentuin, Elandsfontein, Ysterfontein, Clanfresh, Skimmelberg, Rietvlei and Jakkalsvlei participated in the competition.

After an information session during which the safety rules were shared, the 17 participants and all the spectators gathered at a Rooibos plantation on the farm Jakkalsvlei. Each participant had 7 minutes in which to cut Rooibos according to right length – not too short and not too tall. Next, the tea bundles were weighed.

After the scores were tallied, the winners were announced. The winner was Adrian Witbooi from the farm Elandsfontein with 62.95 kg (with an average of 8.99 kg per minute), followed by Rosvel Prima (26) in second place with 61.95 kg and Frank Ndovu (27) in third place with 58.9 kg. Cash prizes, sponsored by Kaap Agri Graafwater, were handed to the winners. Each participant also received a Rooibos Route gift bag with a selection of Rooibos teas and products.

Krisjan Mouton, chairperson of the Olyfenboschkraal Agricultural Association, thanked the participants, organiser Wimpie Smit, the sponsors and the spectators who all played a role in ensuring the success of the event. The organisers look forward to expanding the competition next year and involving more agricultural societies.

Cheers to drinking on a budget this summer